Contact with us through our representative or submit a business inquiry online.

The compressed air is passed through a Twin Tower PSA module interconnected with automatic changeover valves. At the bottom of PSA towers, Activated Alumina is provided which has a tendency of adsorbing moisture from compressed air. After passing through this bed of Activated Alumina air gets dried. Supply of dry compressed air from this layer of desiccant (activated alumina) will be continuous without any interruption. Dried compressed air will now come in contact with a bed of carbon molecular sieves (CMS). Carbon Molecular Sieves are a special grade of adsorbent which has the property of preferential adsorption of oxygen molecules. At a time one tower remains under nitrogen production cycle, whereas the other tower undergoes regeneration which is achieved through depressurization of the tower to atmospheric pressure. The two towers of PSA modules are inter-connected with automatic changeover valves through pneumatic signal given by solenoid valve which in turn get the electrical signal from the timer provided in the control panel. The changeover time cycle will be 1 + 1 minute. The outgoing nitrogen gas is sent to a surge vessel where the minimum nitrogen pressure will be maintained with the help of Backpressure Regulator. The product nitrogen will now be sent to the consumer point through a pressure reducing valves at the required pressure.

Oxygen content in product nitrogen can be brought down to 1-3 PPM with the use of DEOXO Unit.

In this unit, the residual oxygen in Nitrogen From PSA Unit is mixed with Hydrogen and the mixture is passed over Palladium Catalyst where Hydrogen reacts with Oxygen and makes water. The reaction is exothermic and the outlet gas is cooled down in After-Cooler where moisture vapour condenses and it is separated and drained out in moisture separator.

This nitrogen still contains moisture in vapour form which is removed in Gas Dryer and the outlet Nitrogen is at (-) 60 Deg C Dew Point (Atm).

The final product Nitrogen composition is

Alternately where hydrogen in product nitrogen is not acceptable, Copper De-Oxo units are used. In this system, one tower remains in the Oxygen removal cycle, whereas, the other tower undergoes regeneration of the catalyst. Oxygen removal is obtained by reaction of Oxygen present in Nitrogen with Copper Catalyst as per following equation.

This reaction takes place at around 1800C.  For this purpose, a tower is provided with an embedded heater. Raw-nitrogen passes through the heater before it comes in contact with the copper catalyst. The out-going nitrogen will be totally free from oxygen. As indicated above, the spent catalyst i.e. CuO is converted back to copper by injecting Hydrogen – Nitrogen mixture in the tower under regeneration, so that copper catalyst gets regenerated as per the following reaction:

This reaction also takes place at a temperature of around 1800C. which is achieved by the heater embedded in the tower. Nitrogen – Hydrogen mixture, which is used for reaction of spent catalyst is vented to atmosphere. Each tower of copper catalyst remains in Oxygen removal cycle for a period of 8 hours and towers then get changed over automatically which the help of sequence timer provided in the control panel. Pure nitrogen gas coming out of Copper Catalyst De-oxo Reactor will be at 2000C. and its temperature will be brought down to ambient level through an after-cooler which is a shell and tube type heat exchanger. The pure and dry nitrogen gas at ambient temperature.

Following will be the product gas composition at the outlet of Copper Catalyst system: 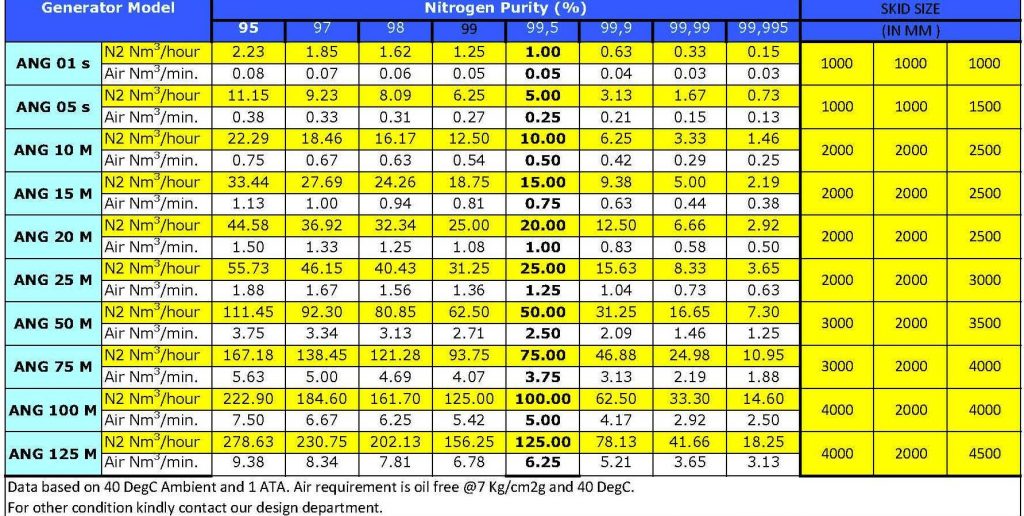 Industrial Solution ... We Are Available For You